JP Communications is a  communications company being active and specializes in the pharmaceutical and health fields. Ιts founder, Jenny Pergialiotou, has a long and solid background in the specific fields.

Our products and services portfolio range from scientific publications with The Doctor  magazine being our main ‘vehicle’ to address the scientific community in Greece up to the organization of  scientific  events.

Moreover, JP Communications is selected by the Galien Foundation USA as the preferred partner and  official representative of the Prix Galien Awards in Greece – equivalent to the Nobel Prize in the global Pharmaceutical Industry.

In order for JP Communications  to meet the high demands of projects aimed at the pharmaceutical market and the wider field of health, we have established partnerships and liaisons with key decision makers in the area such as:

JP Communications is active in the following areas:

The Doctor is a quarterly issued scientific and lifestyle magazine, the structure of which is based in two parts:

The first part is purely scientific. Its content includes scientific issues of all disciplines, guidelines, interviews from leading scientists and personalities from the field of health in Greece and abroad, overview of the most important international developments, scientific articles on health economics and the current setting of the Greek health policy, special reports on domestic and international medical conferences, presentations of clinics of public and private hospitals, presentations of the activities of scientific societies and patient associations. The regular columns cover topics on pathology, oncology, hematology, cardiology, pulmonology, gastroenterology, infectious diseases, neurology, rheumatology, gynecology and surgery ensuring readability by physicians of most specialties. Also articles on medical equipment and innovative treatment techniques are included. Finally, through The Doctor magazine all running CSR activities of the pharmaceutical companies are presented and extensive references to their pipeline are made, in order to keep the medical scientific community updated on innovative therapies and technologies that will be important weapons in their arsenal scientific future.

The second part of the magazine intends to lure readers to the pleasures of modern life, introducing new products, suggesting excursions, stylistic trends, amusement, presenting significant achievements of foreign cultures, documenting the design of the era, in an effort to become the vehicle of experience, criteria and senses for a better life, with high aesthetics, self-awareness, information, enjoyment.

The scientific magazine TheDoctor® is issued quarterly and is distributed to: 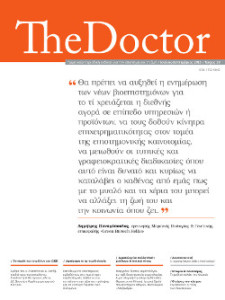 The Prix Galien rewards excellence and novelty, and awards special honors to those who have served humanity at large by upgrading the quality of life or even by saving lives through the development of innovative drugs and diagnostic tools.
For that reason, the Prix Galien is regarded as the equivalent of the Nobel Prize and is the highest distinction in biopharmaceutical research and development.

So far, the Prix Galien are conducted in 20 countries around the globe.

The Prix Galien institution abroad has been supported by important personalities as Messrs Ban Ki Moon, UN Secretary General, Barack Obama and William-Jefferson Clinton, US Presidents, Nicolas Sarkozy and Francois Hollande, the French President and other personalities from the fields of politics and science. Our country launched the institution of Prix Galien on February 2, 2013, at the Athens Concert Hall and the awarding ceremony was held under the auspices of H.M. President of the Hellenic Republic, Mr. Karolos Papoulias.

The jury of the Prix Galien is composed of internationally renowned distinguished scientists in the field of medicine, genetics, biotechnology, pharmacology, chemistry and molecular biology.
The institution of the Prix Galien, beyond the scientific aspect, it has a strong social and humanitarian character. For this reason, in each ceremony a Humanitarian Award is bestowed, (Pro Bono Humanum), which rewards a person or a group of people who have contributed significantly in the health sector in Greece.

In addition, on March 7th 2015, when the second ceremony of Prix Galien Greece awarding ceremony was held, two new, great prizes were introduced: the Galien Scientific Research Award and the Patient Initiative Award. These two awards are coming to recognize the scientific research that leads in curing serious diseases and to reward the actions of Patients’ Associations, that obtained the best possible patient access both to information and to health facilities.

Finally, in November 2015 the Galien Patients Academy will be established, which aims in offering – in cooperation with specialists- training seminars to patients’ associations members in order to strengthen their assertive and communication profile ensuring most benefits from the state. 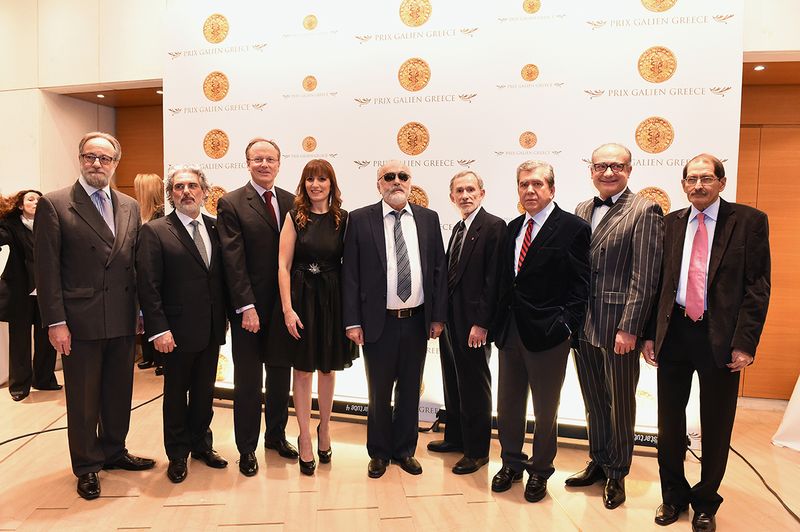 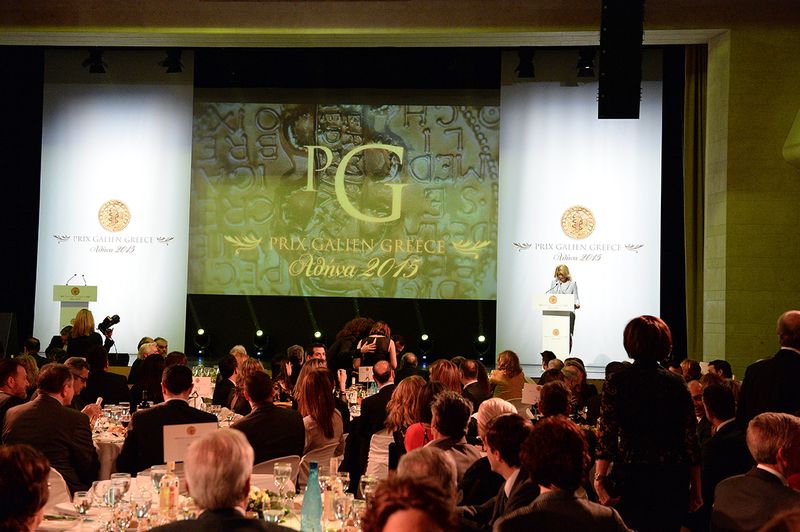 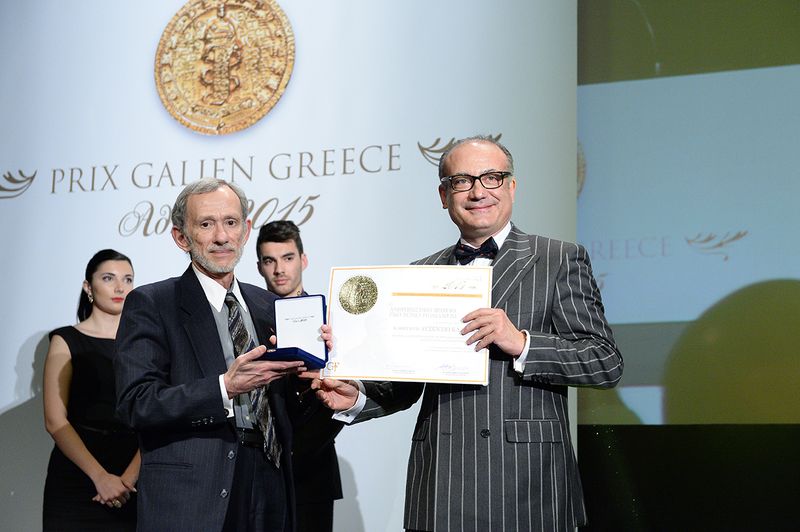 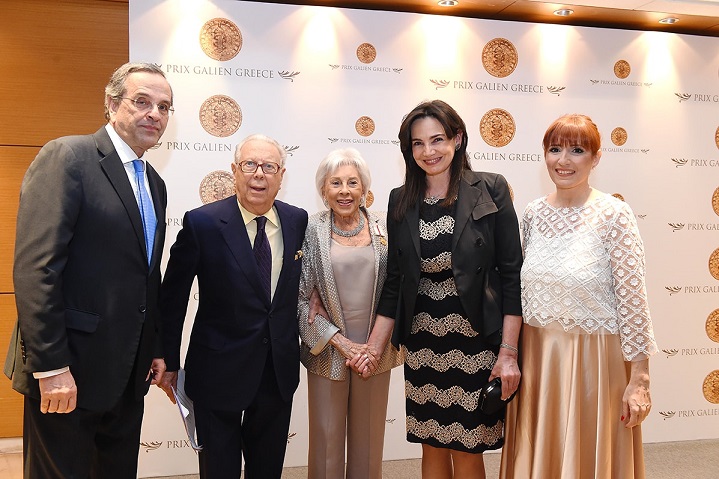 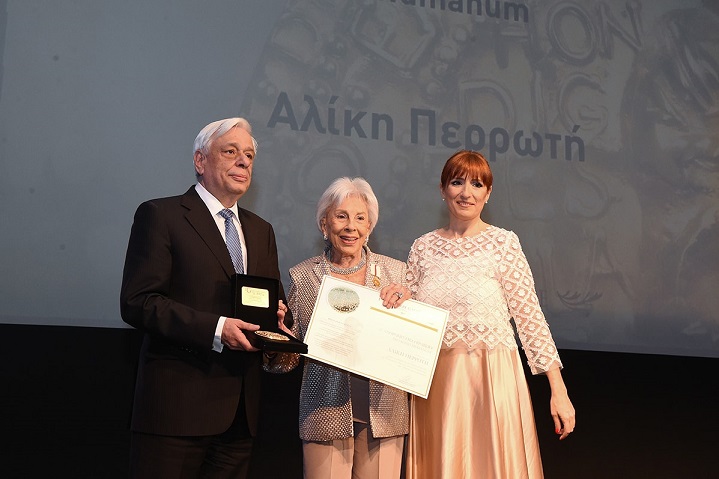 On the occasion of World Diabetes Day (November 14) – landmark day by the United Nations as the principal international campaign vehicle for raising awareness to the problem of diabetes – JP Communications organized on 11.11.14 on behalf of the Greek Diabetes Association a press conference in order to inform the scientific community, the government agencies and the general public about the new data on diabetes, and the value of prevention its regulation.

In addition, the buildings of the University of Athens, the Academy of Athens and the National Library of Greece on Panepistimiou Street were illuminated with the “blue light” that is the global symbol of diabetes, to further emphasize the scientific dimension of World Diabetes Day. During the illumination ceremony of the three buildings, a video-documentary was screened about the journey of diabetes, which started in antiquity, reported in the present and moved to the future and the pledges it carries for people with diabetes. The illumination ceremony was under the auspices of the Ministry of Health and Social Solidarity, the support of the Diabetes Society of Northern Greece (DEVE), the National School of Public Health and the kind support of AstraZeneca.

During the press conference, new data on the progress made on diabetes were presented by the President of the Greek Diabetes Society, Mr. A. Sotiropoulos, Deputy Minister of Health Ms. Katerina Papakosta, the Chairman of the Research Committee of the National School of Public Health Ms. Elpida Pavi, while the day ended with an optimistic message from the president of the Panhellenic Union for the Struggle Against Juvenile Diabetes Ms. Sophia Manea. 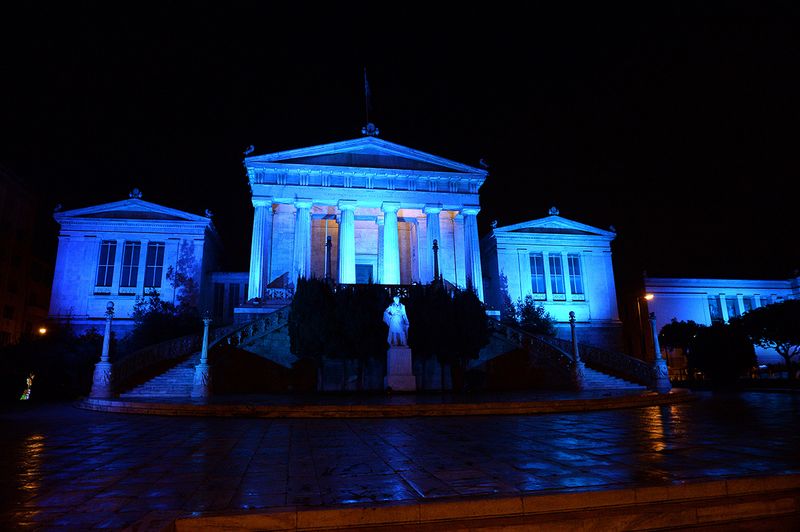 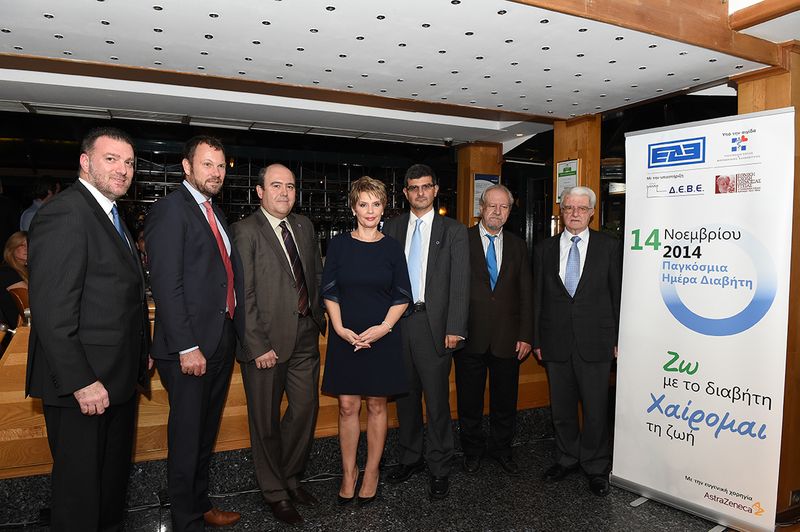 On the occasion of the presentation of the innovative device Cefaly®, which is a new approach for the treatment of headache and migraine, JP Communications organized on behalf of the Hellenic Headache Society a press conference on May 7th 2015, at Divani Caravel Hotel.

The main speakers at the press conference were Mr. Dimos-Dimitris Mitsikostas, Neurologist, MD, PhD, Director of the Neurological Clinic of the Athens Navy Hospital, President European Headache Federation, who focused on the pathophysiology and epidemiology of headache and migraine, Clementine E. Karageorgiou, Neurologist – Psychiatrist MD, PhD, Director of the Neurological Clinic, Medical Center of Athens, President of the Hellenic Headache Society, referred to the drug treatment of migraine in adults and children and Professor Dr. Jean Schoenen, Honorary Full Professor, Headache Research Unit, University of Liège, Dept of Neurology, Citadelle Hospital, Liège, Belgium, who focused on the results and modus operandi of noninvasive peripheral nerve stimulation for the treatment of headache.

The press conference attended the well-known actor and presenter Anthony Loudaros who, himself suffering from migraine attacks, shared with journalists and the public his experience of using Cefaly® in order to encourage them by stressing that there is a way to manage migraines and continue to live a quality life. 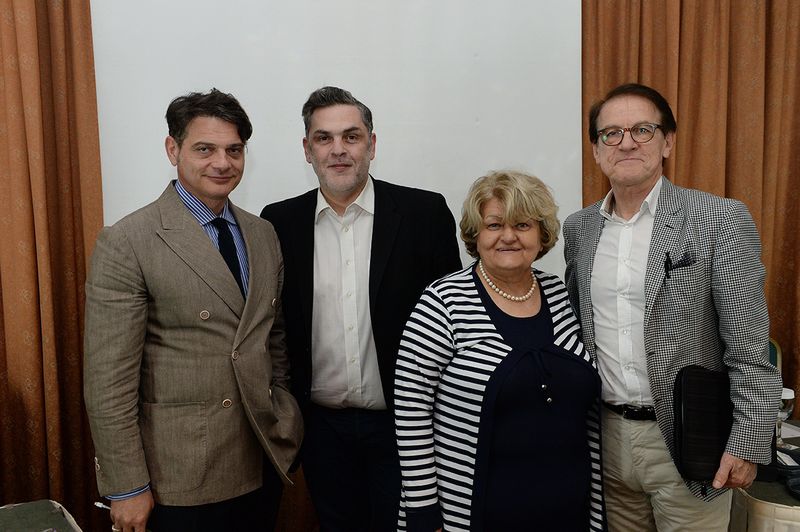 The Galien Patients’ Academy Program will operate under the umbrella of Prix Galien Greece and is under the auspices of the Oncology Centre of Biomedical Education & Research. The GPAP in cooperation with specialists, will offer Patients’ Associations representatives seminars of specific topics concerning communication, new members’ recruitment, access to health, patient compliance market, health economics, health technology assessment (HTA), clinical studies, on the basis of patients’ associations needs with the main objective to:

GPAP courses will begin in November 2016, one training cycle per semester. The duration of the courses will be two (2) weekends for four (4) modules in a total of 25 students per course.

For a detailed course curriculum of the first cycle, please contact us.

The participation of Patients’ Associations in GPAP is gratis and all running costs are covered entirely by donations. 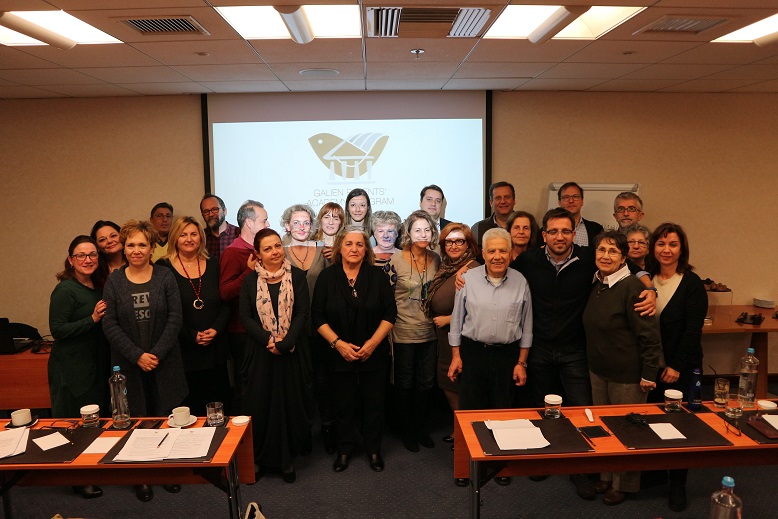 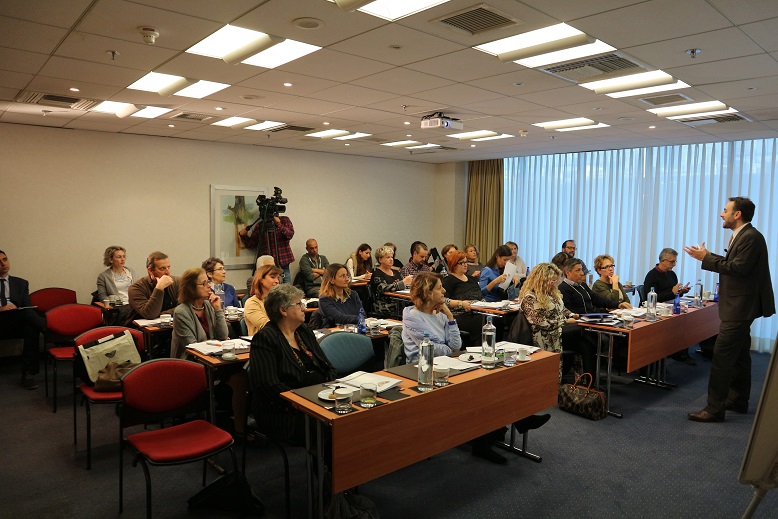 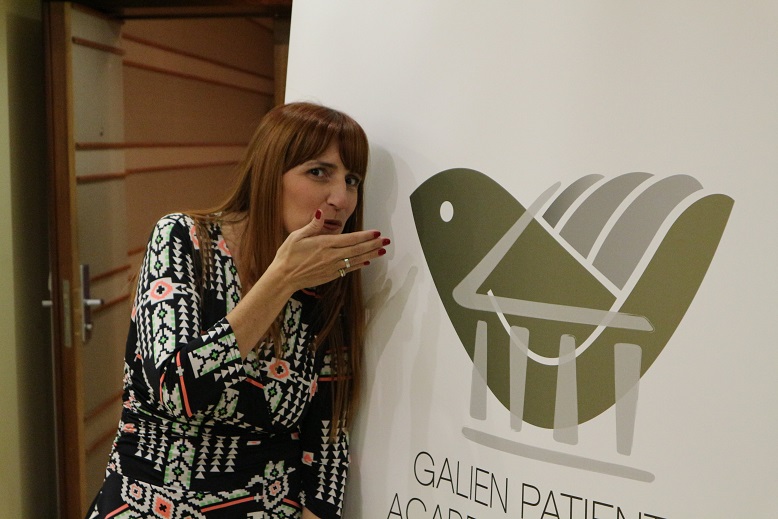 The Galien Think Tank Greece (GTTG) is an important, independent institution that will function as an advisory configuration center for the health sector in Greece. The aim is to create viable proposals operation of the National Health System, taking into account all the parameters currently applied in the country. A crucial role in achieving this goal will play the presence of party representatives of the Greek Parliament, covering the areas of health and social affairs, who will take the GTTG’s proposals into account, process them and finally will make recommendations for a vote in the House.
The GTTG aims to bringing – for the first time in Greece – together all forces from the field of health: scientists, researchers , organizations, patients’ associations and personalities within and outside the country that want, are able and aspire to contribute with opinions and ideas, scientifically documented, to rationalize the wrongs in health and lead to a sustainable system that will be purely patient-centered.

The basic pillars of action of GTTG are:

2. Financing innovation in the healthcare sector with a major axis:

3. Strengthening of clinical research in Greece with a target:

GTTG Forum
The recommendations of the members of all three pillars of GTTG will be announced each year during the GTTG Forum, starting in November 2014.
Moreover, the GTTG Forum will be the basic platform for communication and exchange of views between members of the GTTG and all stakeholders associated with the formulation of health policies on a local, national and European level.

Following the GTTG Forum, suggestions from all speakers will be gathered and evaluated by the members of the GTTG and finally submitted to the competent parliamentary representatives and the Health Committee of the House as final recommendations for voting. 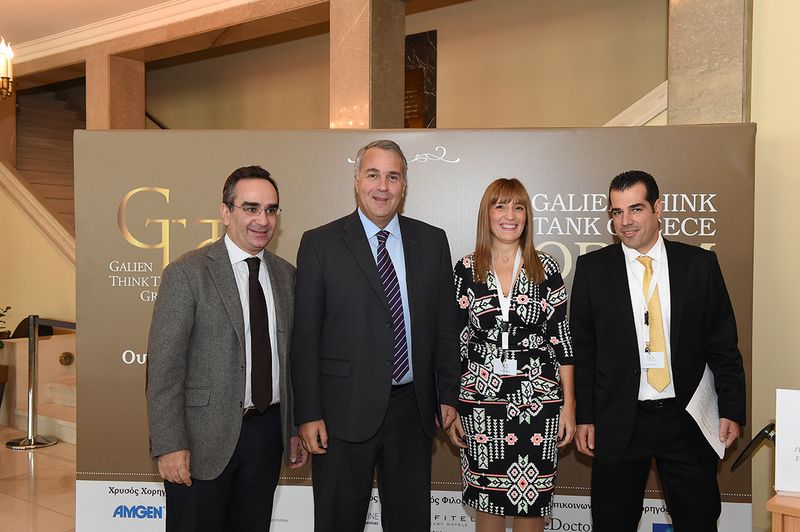 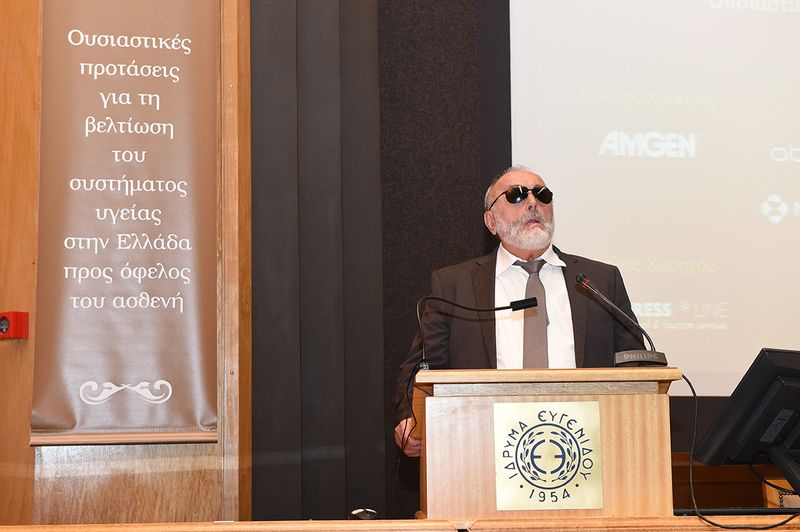 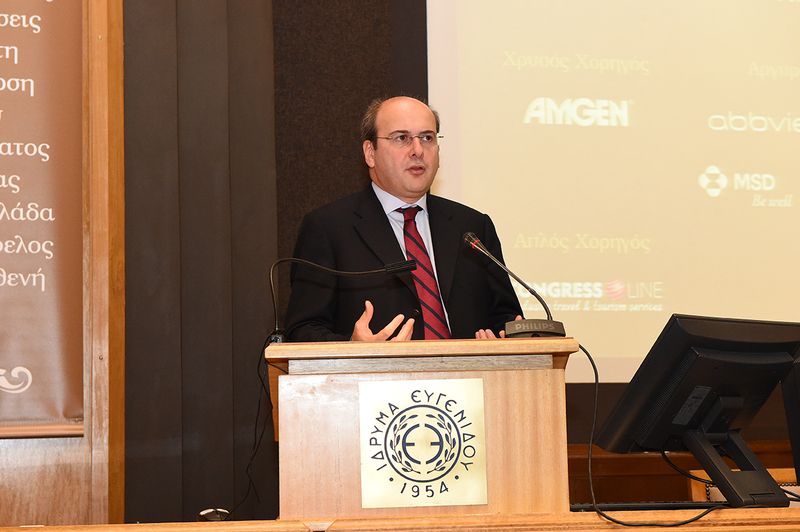 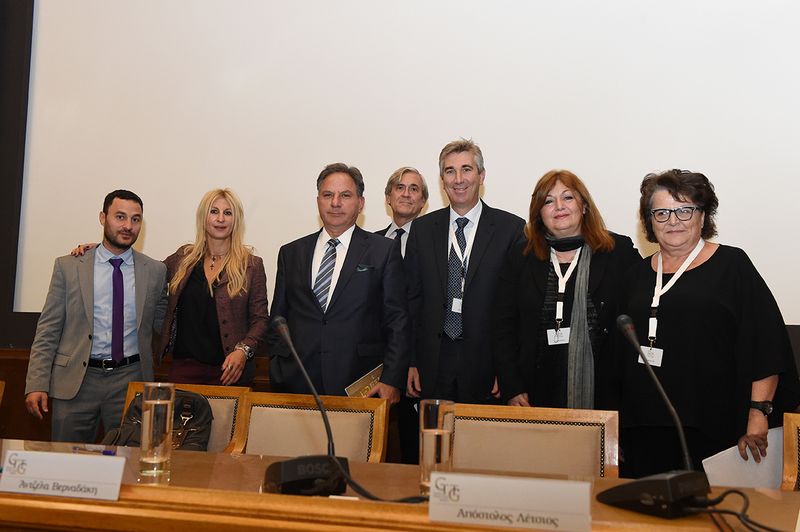 Η JP Communications has collaborated with the following companies (in alphabetical order):

Any cookies that may not be particularly necessary for the website to function and is used specifically to collect user personal data via analytics, ads, other embedded contents are termed as non-necessary cookies. It is mandatory to procure user consent prior to running these cookies on your website.